Everything about the Samsung Galaxy Xcover 4s G398 Black

Are you a student with a smaller budget, do you work outside often, or are you simply looking for an affordable but robust smartphone? The Samsung Galaxy Xcover 4s is the successor to the popular Xcover 4 and comes with various upgrades in different areas.

The device comes with a military certificate and an IP68 certificate, which means it can take a hit and is water resistant. There's 32GB of expandable storage space, you can take pictures with a 16-megapixel resolution, and the 2800mAh battery can be replaced by the user.

This black ruggedized smartphone from Samsung comes with an IP68 certificate. In other words, this device is resistant to dust and water. This is a very useful feature if you work in rougher surroundings, or if you're a little clumsy.

Robust phone that can handle a fall

This device comes with a so-called MIL-STD 810G certificate, which is also given to different military devices. This means this device should survive a one metre fall on the street, for example. Of course, you always have to be careful!

Can be used with gloves

This Xcover 4s can be used in wet and dirty circumstances. That's why it's very handy that you can use this black Samsung smartphone with gloves on. You can operate the screen just like you're used to, so you won't have to worry about the gloves you're wearing!

Samsung has equipped this device with the Xcover key, which is a physical button on the side of the device. You can program this button to perform certain actions, like opening the flashlight app. Now you won't have to touch the screen at all, which is very handy!

Do you want to use your device to listen to music, watch videos, or store some pictures? The smartphone comes with a standard 32GB of storage space. If this isn't enough space for you, you can easily and quickly expand it by placing a microSD card in your device.

In terms of display, we don't see a lot of improvement compared to it's direct predecessor. That wasn't necessary anyway, because this display proved itself in the Xcover 4. This display measures 5.0 inches and has a 1280x720 pixel resolution. It might not be the sharpest display, but it does provide an even longer battery life!

Once again, Samsung has chosen a 2800mAh battery. However, charging is now done via the more-modern USB-C port. You can also remove the back of the device yourself to change the battery. Thanks to this handy feature, you can carry a spare charged battery with you!

Shooting some pictures in the workspace is no problem for this Xcover 4s Black. You can take 5-megapixel selfies with the front camera, and the back of the device features a 16-megapixel camera. On top of that, you can film in Full-HD quality, so you'll definitely capture enough details.

The Xcover 4s runs on Android with a few added adjustments by Samsung. That means the interface looks slightly different, just like the settings menu. Samsung has also added some of their own pre-installed apps to the device. If you want to make this device your own, you can dive into the Google Play Store! 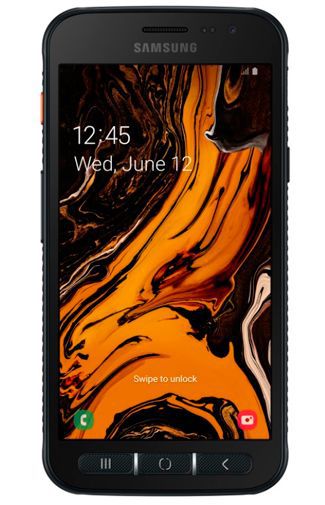