Everything about the Samsung Galaxy Z Flip Black

The Samsung Galaxy Z flip is the second foldable smartphone from Samsung. This means that the screen features a fold, making it possible to flip the phone shut. Flip it open and voilà, you screen is suddenly twice as big!

Samsung has decided to make this Z Flip very compact, so the device is about the size of a regular Samsung smartphone when you open it. Besides the fact that it is one of the first foldable smartphones, it's also a very good device!

This Galaxy Z Flip is a so-called foldable phone. The screen folds open like an old-fashioned flip phone, but it has a complete screen on the inside. You can still feel the fold, but it isn't impractical at all!

Besides the fact that you can fold it, the screen is also exceptionally good. When you flip the device open, you'll find a 6.7-inch screen with a Full HD resolution, so it's nice and sharp. This makes the Flip Z perfect for watching a film when you're on the go.

The hinge takes some getting used to, but it's very robust. In fact, it's so robust, that you can also put the device down in an L shape, so you can suddenly do all kinds of things with your phone that you'd never be able to do otherwise. For example, you can use your own phone as a stand for selfies and it's much easier to make video calls.

Because the Galaxy Flip is foldable, the dual camera on the outside functions both as main camera and selfie camera. It takes stunning photos, even in the dark. It consists of two 12-megapixel sensors of which one has a wide-angle lens. It's perfect for selfies of multiple people or photos of large groups or buildings.

There's another selfie camera on the inside of the device. It is incorporated in a handy punch hole: a small hole at the top of the screen. It's barely noticeable and not in your way, but works perfectly!

On the inside, this Galaxy Z Flip is a high-end phone. Thanks to the Snapdragon 855+ processor and 8GB of RAM, you don't need to worry about hitching pictures, as the phone is very powerful. Heavy games are a breeze, and this Flip won't have any trouble doing lots of things at once.

Small screen on the outside

When you flip the phone shut, you'll find a small screen on the outside. This functions like an extra screen. You can view the time, answer calls, or read short notifications. It's very practical!

A foldable phone has less room for a battery, but this Galaxy Z Flip still comes with a 3300mAh battery. It is divided over the two parts of the phone and makes sure that you can last all day on a single battery charge.

Show all accessories for the Samsung Galaxy Z Flip Black

Accessories that go with the Samsung Galaxy Z Flip

Show all accessories for the Samsung Galaxy Z Flip 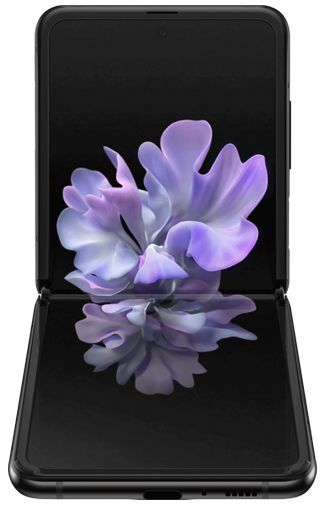