Everything about the LG Wing Blue

Experts about the LG Wing Blue

Average scores of the LG Wing:

Description of the LG Wing Blue

Please note:This LG Wing cannot use the 5G network outside the Netherlands.

In September 2020, LG presented a very intriguing device. This smartphone has a rotatable screen, which allows it to lie horizontally. A smaller display is hidden under that screen so that you can multitask optimally.

Besides this, the device has three cameras on the back, 128GB worth of storage space, and a battery of 4000mAh. The fingerprint scanner is integrated into the display. The Snapdragon 765 processor is powerful and allows you to use many apps without any problems.

The most striking thing about this phone is of course the display. There are two of them! The main screen is 6.8 inches and can be rotated by 90 degrees. This makes it stand horizontally, which is convenient for gaming or watching videos

Of course you can also hold a normal smartphone horizontal to do this, so LG has added an extra screen to increase functionality. This small 3.9-inch display makes it possible to open a keyboard, for example, or to control your music while the big screen displays your navigation.

The battery has a capacity of 4000mAh. Normally this is enough for most devices to last a day on a single charge. Because the LG Wing has two displays, the battery will drain a bit faster, since it also uses more computing power.

This smartphone is powered by the Snapdragon 765 chip. This allows you to use most apps without any problems. Thanks to its design, the device is well suited for playing horizontal games, such as racing games.

With 128GB of storage space, you'll have plenty of room for your apps, photos, music, and other files. It also has 8GB of RAM. It stores data from active apps to avoid long waiting times.

This LG-telephone has three cameras on the back. With the 48 megapixel main lens you can take beautiful photos and shoot wider subjects thanks to the wide-angle lens. The selfie camera has a resolution of 32 megapixels and takes great selfies.

The user manual is not included but can be downloaded or viewed here: Dutch user manual. You can also download an English version: English user manual.

With normal use, we guarantee that your phone will work properly throughout the full warranty period. If something goes wrong, Gomibo.it and LG will make sure to help you out!

How do repairs at LG work?

Accessories for the LG Wing Blue

Show all accessories for the LG Wing Blue

Accessories that go with the LG Wing Blue

Show all accessories for the LG Wing Blue

Colour options for the LG Wing 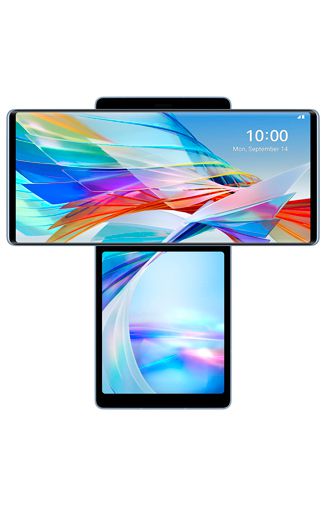