All our tablets are SIM-lock free and compatible with all providers.

This iPad Pro 2018 11 WiFi + 4G is a powerhouse of the highest quality, with a functional yet slim metal design that comes with four speakers and the latest hardware and features. For example, it comes with an 11-inch Liquid Retina display, and is fitted with FaceID for security, just like the iPhones!

You can choose between models with storage space amounts of 64GB, 256GB, 512GB or even 1TB, and between the silver, black, or Space Grey colours. The tablet has its own powerful A12X processor, a future-proof USB-C port, and a camera on the front and on the back.

Apple has made a lot of changes to the processor of this iPad Pro 2018 11 WiFi + 4G. This A12X chipset offers pure power and good visual performance, and it learns from the user through machine learning. All in all, this tablet is much more powerful than most desktop computers!

Apple has chosen to equip this iPad Pro 2018 with the familiar FaceID technology, which has already been used in several iPhones. You'll fully unlock the tablet simply by scanning your face. Thanks to infrared, this works in the dark as well.

This iPad Pro 11 WiFi + 4G offers room for a SIM card, so you can always be connected to a mobile data network. You can continue working, sending emails, and surfing the web on the go. This way, you're always connected!

You'll always look at the screen of your tablet when you're using it, so that has to be perfect. Apple has chosen an 11-inch display with a high resolution of 2388x1668 pixels, also known as Liquid Retina. The corners of the screen are a bit rounded and very thin, so you'll definitely enjoy your viewing experience!

Thanks to the many pixels and powerful processor, you can use this tablet for Photoshop, webbrowsing, Autocad, and multitasking. The True Tone and ProMotion technologies are included as well. True tone allows you to find the exact colour you want, while ProMotion makes sure everything is displayed even smoother thanks to the 120Hz refresh rate.

The A12X also includes a very powerful video chip, which means playing graphic games is great fun. The iPad Pro 2018 11 WiFi + 4G is also the ideal partner for augmented reality. This makes you feel like you're in a virtual world that's mixed with the real one!

This iPad Pro 2018 supports the new Apple Pencil that was presented at the same event. This stylus can be magnetically clipped to the iPad, which is also a way to charge the pencil. By tapping the stylus twice, you can activate a feature you've set up, like zooming in Photoshop.

Not lightning, but a USB-C port

This iPad Pro 2018 11 WiFi + 4G no longer has its own familiar Lightning port, which has been replaced by a USB-C port. This connection can be found on many other devices, tablets, and smartphones. Apple has opted for this port so you'll be able to quickly connect your tablet to a display, for example.

10 hours of browsing or watching videos

If you leave home with a fully charged iPad Pro 2018, you'll easily get through the day on that single battery charge. The battery lasts about 10 hours when you're surfing the web or watching a movie. Even with heavy applications, the battery life is very good thanks to the smart A12X processor.

The entire iPad Pro 2018 11 exudes luxury, and that's not just in terms of looks and hardware. In terms of software, the tablet runs on iOS, which was optimised for use on this large screen. You can navigate through the menus via the bar at the bottom of the screen, which is both easy and fast! 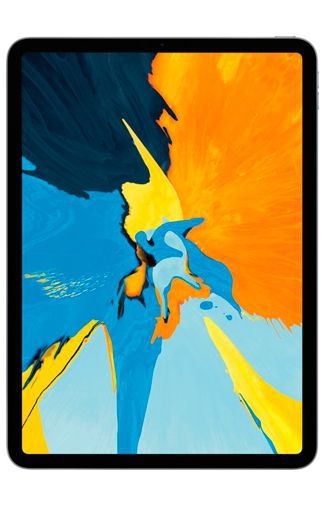